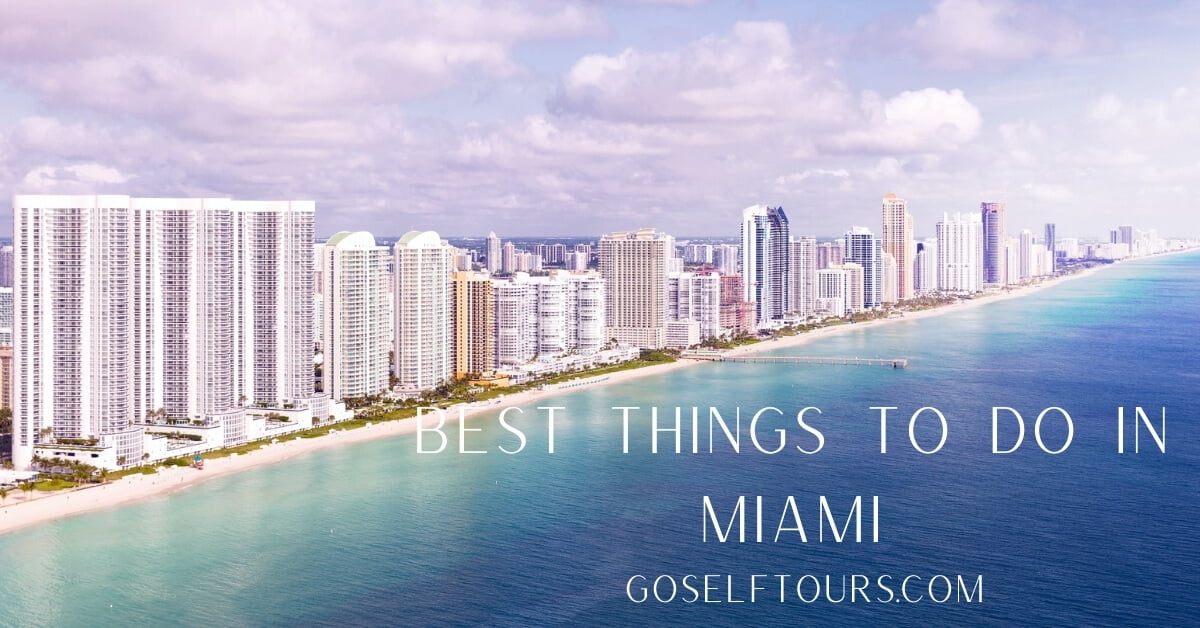 Any of us, at least once in our lives, should visit the fantastic Miami: located in the southern part of Florida, it is one of the most beautiful beach destinations in America, where you can relax along the beautiful, white, and tropical South Beach, a beach frequented at any time of the year thanks to the mild temperatures that characterize this area of America.

But Miami is also, and above all, the emblem of nightlife, full of clubs of all kinds where you can dance and have fun all night long. Without forgetting the unique natural places in the world such as the famous Everglades National Park or the unique and original neighborhoods like Little Havana that perfectly evokes the air of Cuban cities.

All of us, at least once in our lives, have seen on TV the wide promenade with its characteristic palm trees: it’s Ocean Drive, one of the most popular areas of Miami, full of movement, full of guys on rollerblades, convertible cars, bars, restaurants and hotels of all kinds!

It’s one of the busiest areas, where you can dine outdoors or dance in one of the many clubs. The promenade of South Beach is characterized by a very long beach with crystal clear waters and is famous worldwide for having been the set of many TV series and movies such as Miami Vice and Scarface.

How to get there: it is located in the southern part of Miami Beach. To reach this street from the North area, use, for example, the bus n°120 of the Miami-Dade Transit company (ticket from $2.70) – Get directions.
Hours: always accessible
Ticket cost: free; guided tours starting at $22.05 or more
Card, tickets, and recommended tours: Legendary Vintage Cabriolet’s Ocean Drive private tour

Any time of day or night, something exciting always happens in Lincoln Road: the mecca of shopping lovers. More than ten blocks of shops, restaurants, and entertainment await you on this street of unmistakable energy, constantly animated by a mix of tourists and locals. During the day you can relax at a table while sipping a coffee or cocktail and soaking up the “real” South Beach lifestyle. In the evening, the music of restaurants and bars is playing and street performers are showcasing their talents.

But the real attraction of the place is shopping! You’ll find national and international shops with unique offers that you won’t find in other cities!
H&M, Forever 21, lululemon, Scotch&Soda, Madewell, Ted Bake… and there’s even a giant Nike Store, where customers can literally try out their potential new shoes by shooting hoops on a basketball court or running on a treadmill.

Directions: Located on the south side of Miami Beach, you can get to this street from the north by taking the Miami-Dade Transit company’s 120 bus (ticket from $2.70).
Hours: always accessible
Ticket cost: free

Biscayne Bay is famous for being the place where various famous people live and are the most famous bay between Miami and Miami Beach. Artificial islands were created here, starting in 1900, with sand drained from the bay to allow passage to large boats.

The most famous islands are, for example, Hibiscus Island, Palm Island, but also Fisher Island and Star Island, which are the real wealthy face of Miami, where the singer Shakira, Gloria Estefan, Julio Iglesias, and many other entrepreneurs and movie stars live. Obviously, they are islands that are not accessible to the public and cannot be visited, so the only way to see them “closer” is by boat.

How to get there: the main islands of this bay can be reached by taxi in 40 minutes, or using the boats that leave from the Port of Miami – Get directions.
Hours: always accessible
Ticket cost: free; the cost of the tour recommended by us is €56.59
Card, ticket, and recommended tours:Miami: city tour with boat and language option

A very glamorous and lively tourist destination is the Art Deco district of Miami, very particular with its many buildings erected since 1920. Over the course of 100 years, they have undergone numerous renovations and have become some of the official and best-known symbols of this fantastic metropolis.

These buildings were created to “lift” the mood of Americans during the Great Depression of ’29 with their bright colors and geometric shapes of all kinds (straight lines, cubes, and spheres), porcelain floors, bas-reliefs, signs with neon lights. The most interesting route to visit is the one that crosses streets 6 and 7, where you will find the Park Central Hotel, Colony Hotel, Waldorf Towers Hotel, Breakwater Hotel, etc…

How to get there: the neighborhood is located south of South Beach and includes part of Ocean Drive; it can be reached in 45 minutes by bus no. 120 from Miami North Beach (ticket from €2.70 approx.) and in 20 minutes by taxi – Get directions
Hours: always accessible
Ticket cost: free; the cost of the tour recommended by us is €27,55
Card, ticket, and suggested tours:Miami: panoramic tour on the Hop-On Hop-Off bus

This is one of the most famous neighborhoods in the city of Miami, known for its quiet atmosphere and for being the place where so many artists, musicians, and writers resided since 1800 for the affordable prices of housing. It began to be populated when, for the first time in 1884, the first hotel, the “Bay View House,” was opened, giving input to the construction of many other tourist establishments. Until 1925 it was an independent city; later, it was annexed to Miami.

One of the most interesting spots in Coconut Grove is CocoWalk, a three-story complex with cinemas, cafes, restaurants, and shops for all tastes. Also very interesting is the Vizcaya Museum, a three-story building divided into 34 rooms all decorated with hundreds of objects dating back to the 15th – 19th century; you can also cross Brickell Street, full of old houses and large villas.

How to get there: Coconut Grove is connected to the city via the Metrorail with Vizcaya and Douglas Road Station (ticket from €2.70 approx.); however, we recommend that you travel the entire area take a rental car – Get directions.
Hours: always accessible, while the CocoWalk is open Sunday to Thursday from 10:00 to 21:00 and Friday and Saturday from 10:00 to 23:00.
Ticket cost: free

District inhabited by more than 50,000 people (98% of which are of exclusively Latin origin), Little Havana is a small part of Cuba that arrived in Miami during Fidel Castro’s regime. Life is mainly concentrated around Calle Ocho, where you can find many typical Cuban restaurants where you can taste excellent dishes, but you can also come across cigar artisans, walking in an environment where the strong smell of the typical coffee echoes (you can’t leave without trying the famous Cuban coffee served in small glasses).

Among the most interesting places, there is also Parco Màximo Gomez, famous for being the place where the elderly gather to play chess or dominoes. This picturesque neighborhood also attracts many tourists for the spontaneity and liveliness of its inhabitants!

How to get there: you could use the Tram (Trolley), a small tram that crosses all the most important parts of the city and stops near Little Havana; the specific line goes through Miami Dade College, Metrorail’s Brickell station, and arrives at the Miami – Dade County Auditorium, you can use it for free – Get directions.
Hours: always accessible
Ticket cost: free; the cost of the tour recommended by us is $54,20
Card, ticket and recommended tours:Miami: culinary walking tour in Little Havana

Located in Virginia Key, the Miami Seaquarium is a unique place in the world and is known as the largest aquarium in the United States. It is home to numerous fish, sharks, reptiles, and sea turtles, and there are many marine shows every day.

Among the most interesting shows is the Killer Whale and Dolphin Show. Lolita, “the killer whale,” plays with her instructor, the Flipper Dolphin Show, where the fTV series’s famous dolphin plays jumps on the tail, and the Manatee Presentation with the very nice manatees. Every year this attraction attracts more than 600,000 people.

How to get there: starting from Miami Beach or Downtown, by public transport just get off at Brickell Station, you have to take bus 102, and in about 20 minutes you can reach the aquarium (ticket to open from $2.00) – Get directions.
Hours: open every day from 10:00 to 18:00 (the ticket office closes at 16:30)
Ticket cost: adults about €46,00, children from 3 to 9 years about $35,00
Card, ticket and recommended tours: Miami Seaquarium: entrance ticket

This is downtown’s urban park, where you can relax on one of the large green lawns, or play frisbee or football, then it might be a good idea to have a good meal at one of the many restaurants and clubs open almost any time of day.

Bayfront Park is the right place for those who would like to take one of the gymnastics or yoga classes or explore the park by renting a bike. All while enjoying a fantastic view of the beautiful Bay of Miami.

How to get there: it is located at 301 Biscayne Boulevard. To get there, you can take the Metrorail and get off at Government Center Station (ticket from $2.00) – get directions.
Hours: always accessible
Ticket cost: free

This is an absolutely uncommon park, as the animals do not live in small, narrow places but in more than 100 hectares of green and wooded areas. There are as many as 800 species of all kinds, including African lions, black rhinos, Bengal tigers, gorillas, wild boars, hyenas, camels, koalas, etc. Given its vastness, to visit it you can use for example the pedal car (with which you can also exercise), the Safari Tram Tours (tram to move from one animal’s home to another), or the Monorail (a vehicle that crosses the entire zoo from above.

This place is the ideal place to spend a day different from the others and it is extremely suitable also, especially if you are traveling with your family.

This is the wildest area of all the United States. The Everglades National Park is part of the largest sub-tropical nature reserve on the American continent. It is a marshy land that stretches over 6,000 square kilometers characterized by large expanses of falcons, willows, pines, canals, marshes on which there are thousands of mangroves. Many exotic animals such as crocodiles, alligators, bishes, Florida panthers, otters, and various birds such as ibis, pelicans, and storks.

In addition, Everglades is a paradise for birdwatchers. The only way to get to know the Everglades is to sail through them on a speedboat.

How to get there: in the park, there are 5 visitor centers each one is different from the other; from Miami, it’s 1 hour by car, and it’s better to reach it with the local guides who will be able to show you the best way to get around when you get there – Get directions.
Hours: always accessible
Ticket cost: free; the cost of the tour recommended by us is $22.96
Card, ticket and recommended tours:Everglades: airboat tour and wildlife show

Plan your stay in Miami: info on flights, hotels, and tours

Thanks to its enjoyable tropical climate, Miami is a popular destination, especially among newlyweds worldwide; its modernity and beaches are really the top! Obviously, being one of the biggest metropolia in the world, it’s good to know that not all its areas are safe, so we suggest you stay overnight Downtown or in the emerging cool neighborhood of Brickell. In the evening we always recommend you to be very careful, you prefer to travel with friends.

A great way to get around the metropolis is the elevated subway called Metromover, which is completely free and runs through the Downtown and Brickell districts, but the Metrorail can also be useful. To get around South Beach, buses are more functional; for example, Route 120 Beach MAX, each route costs $2.00. To reach downtown from Miami airport, the most suitable means of transport is the Metrorail that leaves from MIA Central Station, which travels with a frequency of 30 minutes on business days and 15 minutes on weekends, the cost of the one-way ticket costs about $2.50; the lines available are the Green Line and the Orange Line.