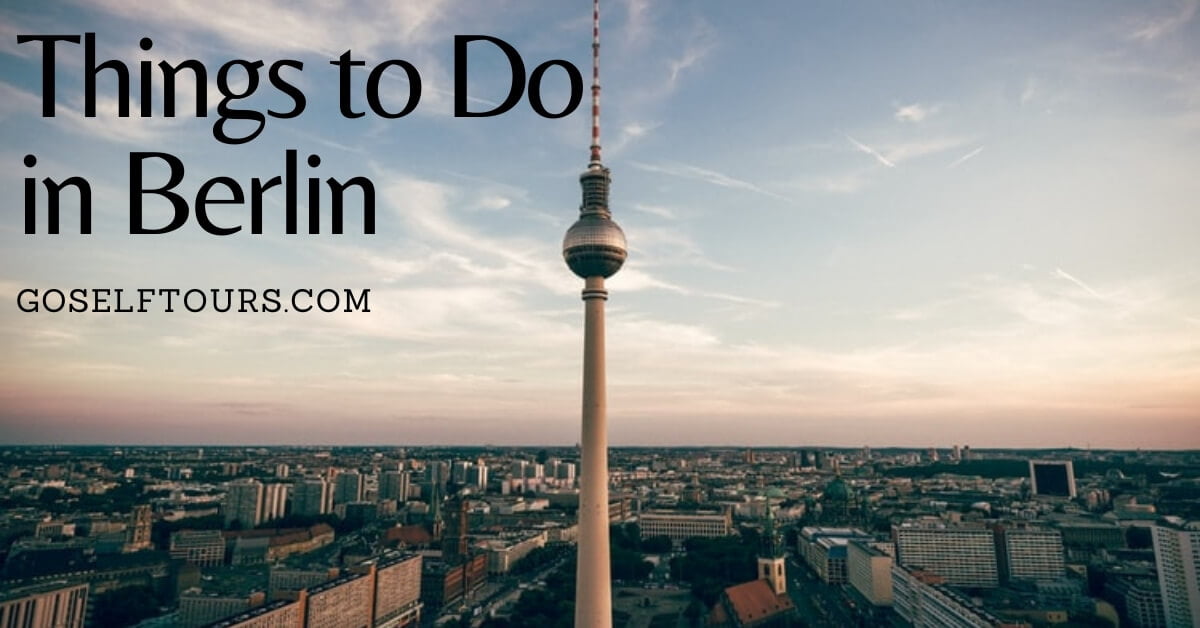 Berlin, the capital of Germany, is a city that has been wounded, destroyed, rebuilt, and becomes a protagonist of the history of Europe and the world over the last 60 years. Famous also for the wall that divided it into two parts, from the post-war period to 1989, Berlin has been able to re-evaluate and rediscover its treasures of human history, hidden by this dark period. Today Berlin is also known as one of the capitals of electronic music, design, and fashion.
Urban reconstruction has allowed the city to resurrect with avant-garde architecture, although here and there, Gothic and post-war ruins survive. If you are planning a visit to the German city, here are the 10 things not to miss in Berlin. 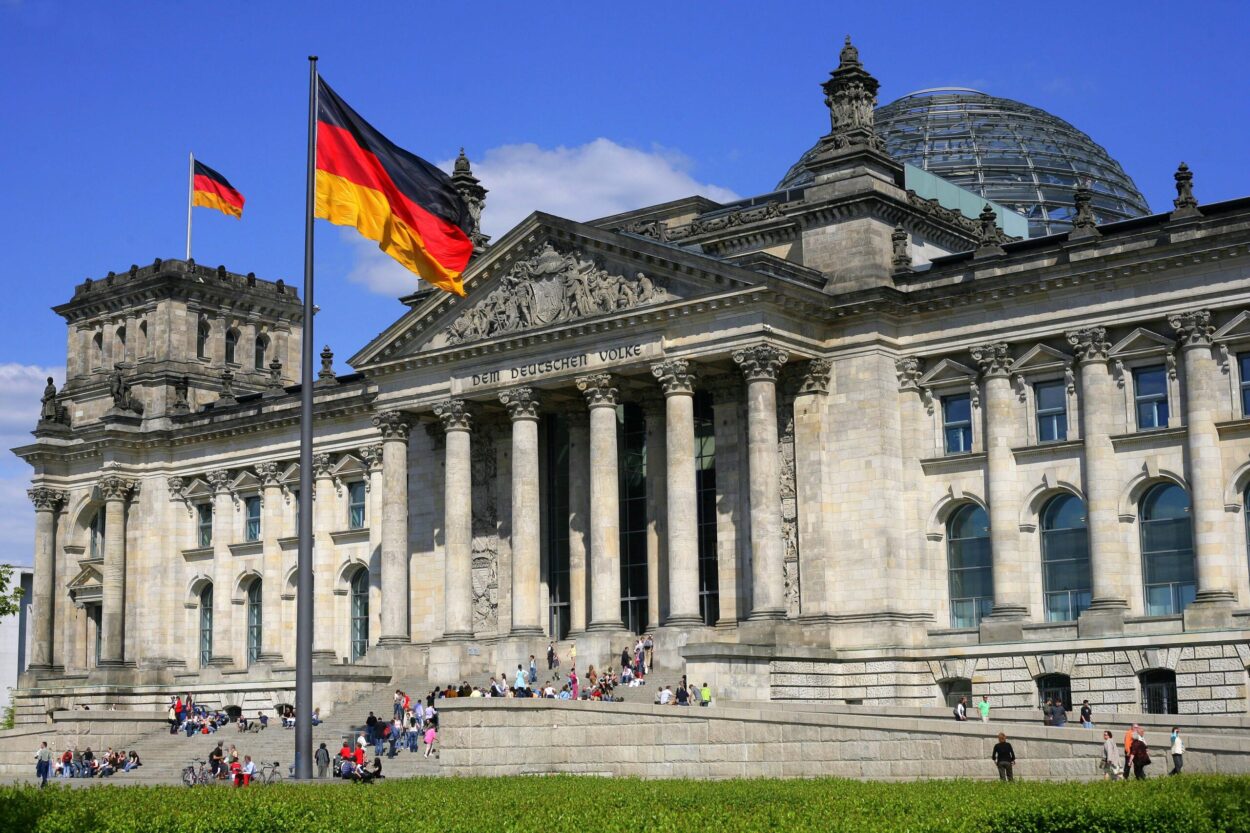 One of the city’s symbols and a must-see destination for every visit, this building is reminiscent of the fall of Nazism. The German Parliament has its headquarters at the Reichstag and, like almost all Berlin’s monuments and palaces, houses testimonies of the Second World War. It was from one of the windows of this building that the birth of the German Republic was proclaimed in 1918. The building was almost destroyed by fire in 1933, and during the war, it was also used as a maternity hospital. After the Wall’s fall, precisely on October 2, 1990, the official ceremony of the reunified Germany was celebrated inside.

The classrooms of the Parliament can be visited free of charge as long as you register online a few days beforehand. There is also the possibility to take part in private guided tours or dine in the panoramic Käfer restaurant, located on the terrace of the building, where you can admire the iconic glass dome up close. 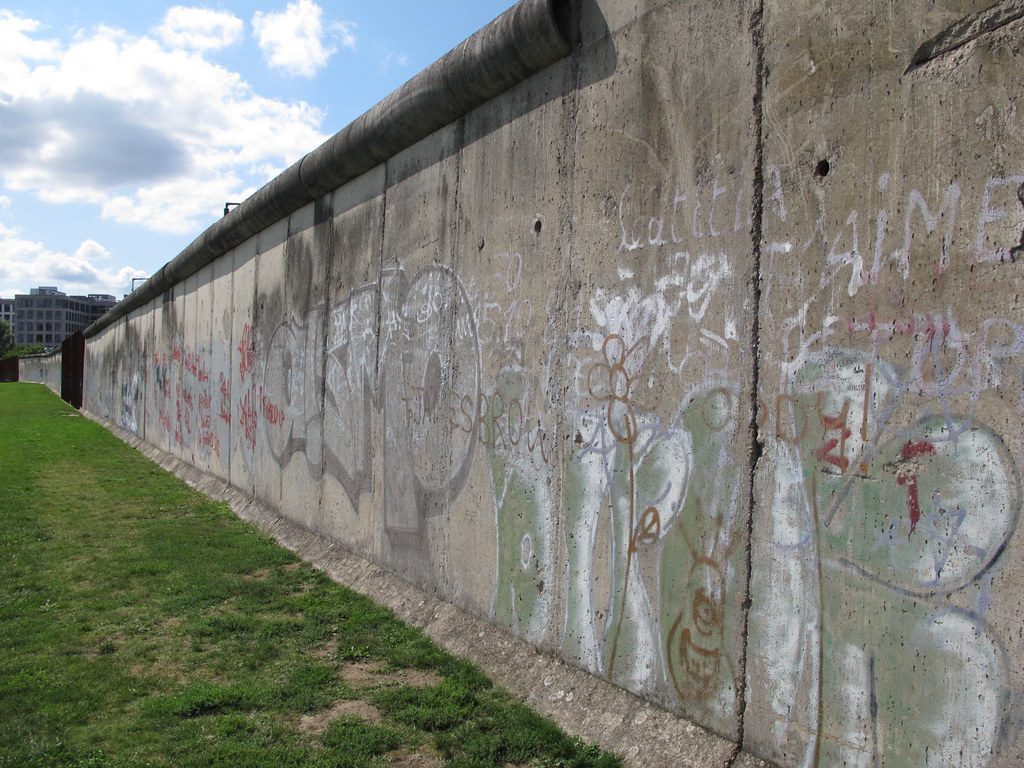 On November 9, 1989, the infamous Berlin Wall was torn down. The Wall stretched for 170 km and was 10 meters high, dividing the American and Soviet parts of the city. It was impossible to cross the border, as evidenced by the hundreds of dead who tried vain. Today only 1 km of concrete remains intact in the city. In 1990, to celebrate the reunification of Germany, dozens of artists decorated the Wall with murals and works of art, which became famous all over the world. The stretch of wall rich in murals is known as the East Side Gallery. 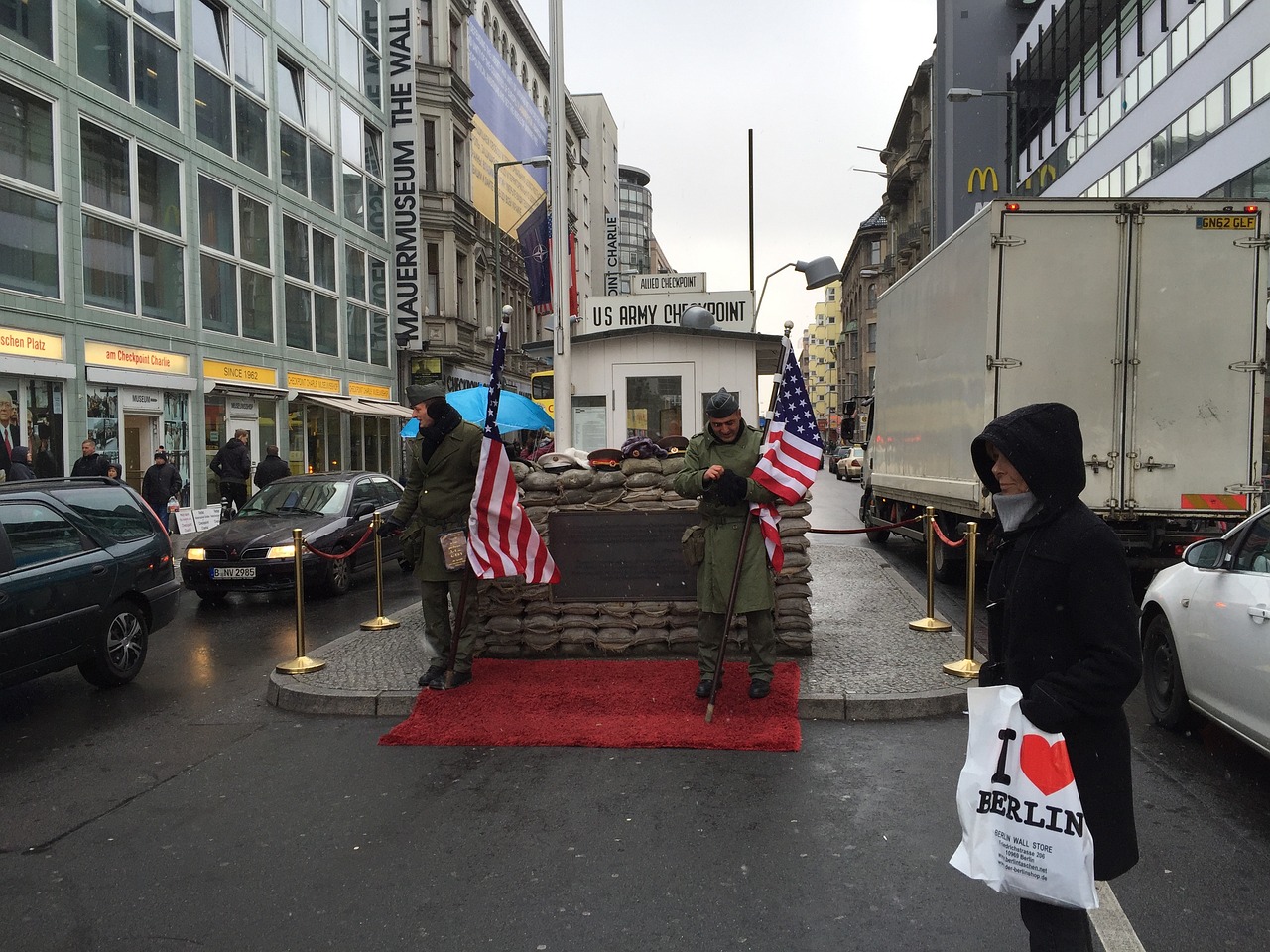 Checkpoint Charlie is the purely touristic reconstruction of the real place of passage from East Berlin to West Berlin and vice versa. The original checkpoint was armored and controlled by the American military; it is located between Friedrichstraße and Zimmerstraße. Once the Wall was destroyed, Checkpoint Charlie was also dismantled, but tourists can still have their picture taken alongside a (fake) Soviet or American soldier, respectively.

Another symbol of Berlin is the famous Brandenburg Gate, an emblem of the division of the two Germanies during the Cold War. Once the Wall fell, it became the image of the nation united again. Carl Gotthard Langhans designed it in 1791; it is a neoclassical building and consists of twelve columns surmounted by the famous Quadriga by Johann Gottfried Schadow. 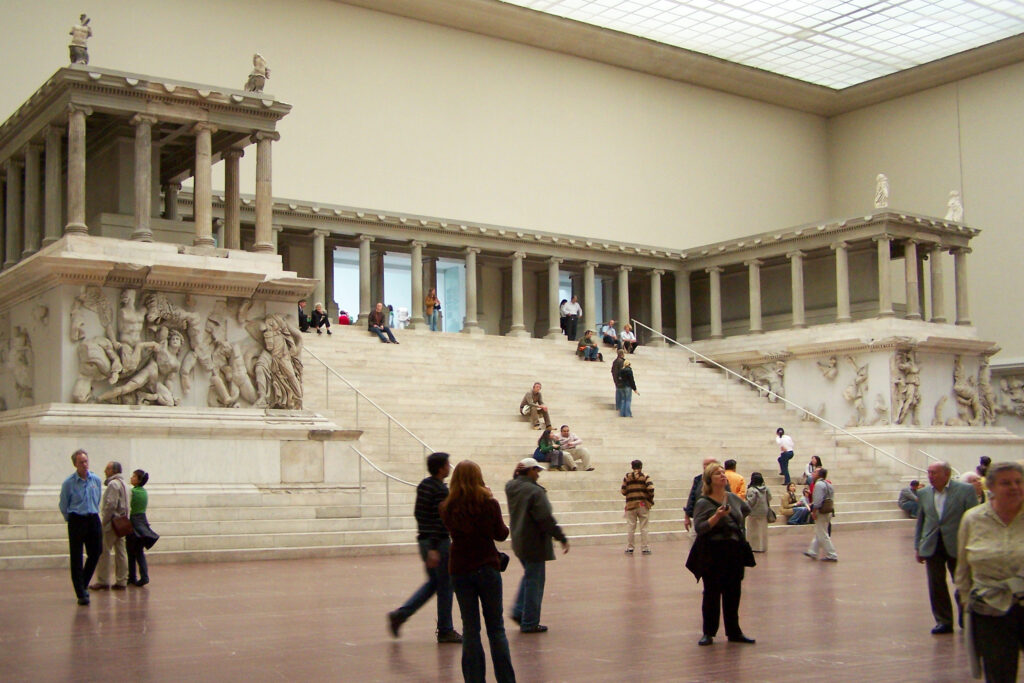 A long avenue leads from the Brandenburg Gate to the so-called Berlin Museum Island, a UNESCO World Heritage Site. There are 5 museums concentrated on this river island; we recommend not to miss the Pergamonmuseum.
It is an imposing building that preserves inside testimonies of different historical eras, from the Roman Empire to Ancient Greece, from the Middle East to the parts dedicated to the Anterior Asia and Islamic Art.

Berlin Cathedral is located a short distance from the Museum Island and dates back to 1904 due to a renovation commissioned by Emperor William II. The current cathedral was designed to reflect the greatness of the Lutheran religion and the prestige of the royal dynasty. The building is 114 meters long, 73 meters wide, and 116 meters high, and at its top, there is a large copper dome, decorated inside with paintings depicting scenes from the New Testament and the Reformation period. It is also possible to reach the top of the dome, walking 270 steps: you can admire the whole city from here. Inside, visitors can appreciate the high altar, an imposing Sauer Organ of 7,000 reeds, and the Hohenzollern Crypt.

The history of the city is indelibly linked to the infamous events of World War II and Nazism. This is why the Holocaust Memorial, a memorial dedicated to European Jews who were victims of the Holocaust, stands in the very center of the city.

The area is covered with 2711 concrete blocks of different heights, from 20 cm to almost 5 m. The result is a labyrinthine structure, narrow and almost irritating for those who walk through it. There is also a permanent exhibition that aims to retrace some stories of Jewish families.

It is the most famous and frequented square, both by Berliners and visitors. The square itself cannot be said to be an example of splendid architecture; on the contrary, it is messy and hectic. It is also an important junction for city traffic: 20 bus and tram lines pass through here. Recognizing it is simple, iconic is the presence of the Television Tower, 365 meters high, and can be visited up to about 200 meters high, the highest structure in Western Europe.

Like all big cities, Berlin also has its large urban park, ideal for a few moments of relaxation in the open air. The Tiergarten covers 210 hectares and includes paths, lakes, and large meadows, which various animals and plants also populate.
Berliners use it for jogging and to spend their lunch break. Inside the park are the famous Berlin Zoo and the impressive Victory Column, at the top of which is the winged statue.

This is a former railway station converted into a museum that houses masterpieces of contemporary art. Here are many works by Andy Warhol and Roy Lichtenstein and by Keith Haring, Anselm Kiefer, and many others. 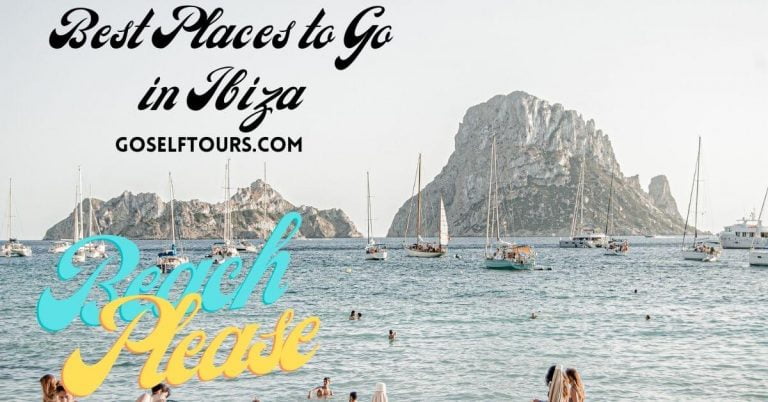 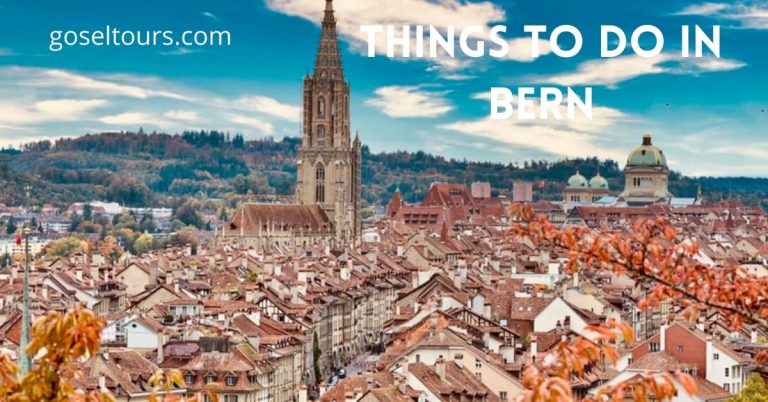